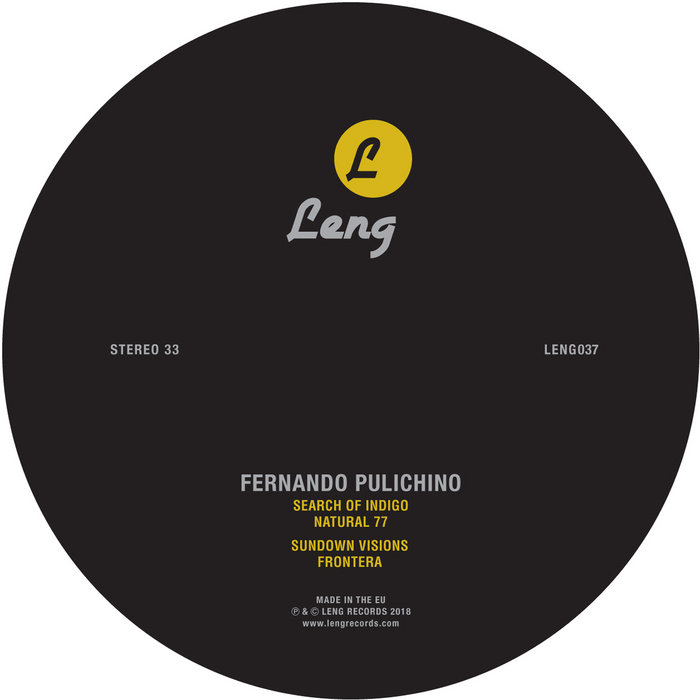 Fernando Pulichino is no stranger to Leng Records. The bass guitar-wielding Argentine made his first appearance on the label five years ago via the cosmic disco/psychedelic rock fusion of Blue Impala, returning two years later with the similarly inclined brilliance of Giant Desert. Pulichino then resurfaced on Leng late last year with a superb, digital-only three-tracker called Natural 77.

Now he’s back on wax, buoyed by the success of the acclaimed Shining EP on Is It Balearic? Recordings. This time round he’s in Search of Indigo, shaping hazy, sun-baked soundscapes around his distinctive basslines, echo-laden synthesizers, meandering Fender Rhodes solos, gentle dub vibrations and glistening, early morning jazz guitars. This is music for the heads, hips and feet, soaked in Fernet and left in the afternoon sun to slowly ripen.

Pulichino’s penchant for intergalactic disco shufflers once again comes to the fore on killer “Sundown Visions”, a saucer-eyed chugger that simultaneously throbs, pulses and sparkles thanks to sparring synthesizer motifs and eyes-closed space rock guitars. We suspect Daniele Baldelli and Andrew Weatherall would approve.